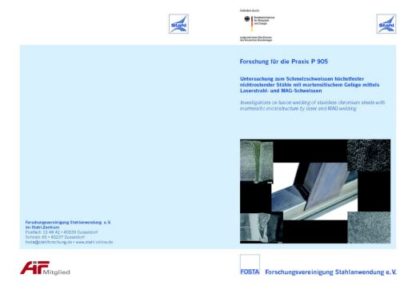 Whoever deals with resource efficiency in lightweight construction cannot get around ultra-high strength steels. Recent thoughts led to the application of stainless steels with martensitic microstructure. These steels have the benefit of intrinsic corrosion resistance, excellent formability and hardenability. Many of them are regarded as not weldable due to their carbon contents of up to 0.46 weightpercent. Hence, trials were undertaken to ensure welding suitability and reproducible mechanical properties. Within the framework of process development a suited concept of weld heat treatment was developed. Mechanical properties were examined in fatigue test on square butt joints for the manufacture of tailored blanks as well as for assembly welds of the already hardened sheets. Experiments according to the KS-2 concept and quasistatic and crash load trials on component-like specimens were carried out in order to investigate the crash performance of welded parts. Last but not least unloaded and loaded corrosion tests had been performed with the aim to raise information on the effect of weld heat treatment of the material’s response to environmental conditions.
In general for welding of martensitic stainless steels short thermal cycles are preferred. In order to control the hardness loss in the heat affected zone a weld heat treatment adjusted to the material, i.e. mainly it’s carbon content is prerequisite. Preheating to martensite start temperature in combination of a suited tempering below the temperature of the dissolution of the alloy carbides will lead to a relaxation of the tetragonal martensite and enhance the ductility of the weld. Preheating also lead to an increase of the width of seam and heataffected zone, that the process becomes less sensitive to maladjustments during manufacturing. Martensitic stainless steels can be welded under a standard weld treatment. In the case of welding tailored blanks a weld heat treatment is not required, but tempering of the weld improves the fatigue propertiesof the heat treatment chosen had a less pronounced effect. With optimum weld heat treatment the fatigue strength of the either unwelded material in as-rolled condition will be attained. In dissimilar welds the values of the fatigue properties are limited by those of the weaker partner. Crashworthiness depends rather on the seam geometry and the load direction than on the weld heat treatment. With extremely high fracture forces the load-bearing capability of hardened martensitic stainless steels supersedes that of manganese boron steels. The latter shoe slightly higher fracture forces and better ductility under axial load. In dissimilar welds with conventional deep drawing steels higher strengths were attained than for manganese boron steels. Especially on the tests on component-like specimens it was found that the failure mode does not only depend on the load rate but also on its direction. Regarding the performance an exact knowledge of the loading mode is required for an optimum application of the materials.
Corrosion properties were tested in an alternating climate test and in oxalic acid sensitization tests according to ASTM. In the alternating climate tests no effect of the corrosive load on the deformation behaviour was detected. No attack of the material occurred. Sensitization behaviour is in general improved by press hardening. An increased carbide precipitation lead so  increasing sensitization of the heat affected zone with the carbon content. Application of weld heat treatment may impair the corrosion properties of the weld after press hardening. No significant effect of weld heat treatment was found in welding of press hardened sheets. All welds showed sensitization in the heataffected zone, increasing with increasing carbon content.
Stainless martensitic steels with more than 12 weightpercent of will be applied where intrinsic corrosion resistance combined with a strength of 1900 MPa is beneficial, as for trucks and busses as well as for railroad vehicles. With the new developments a path for the design of welded structures in these materials is paved.
The research project (IGF-Nr. 17433 N) was carriedout at Fraunhofer-Institut für Lasertechnik, Aachen, at Laboratorium für Werkstoff- und Fügetechnik der Universität Paderborn and at Fraunhofer- Institut für Betriebsfestigkeit und  Systemzuverlässigkeit, Darmstadt. FOSTA has accompanied the research project work and has organized the project funding from the Federal Ministry of Economics and Technology through the AiF as part of the programme for promoting industrial cooperation research (IGF) in accordance with a resolution of the German parliament. 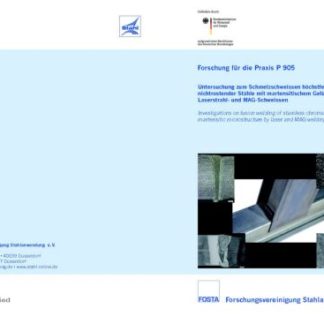 You're viewing: P 905 – Investigations on fusion welding of stainless chromium steels with martensitic microstructure by laser and MAG welding 30,00€
Add to cart