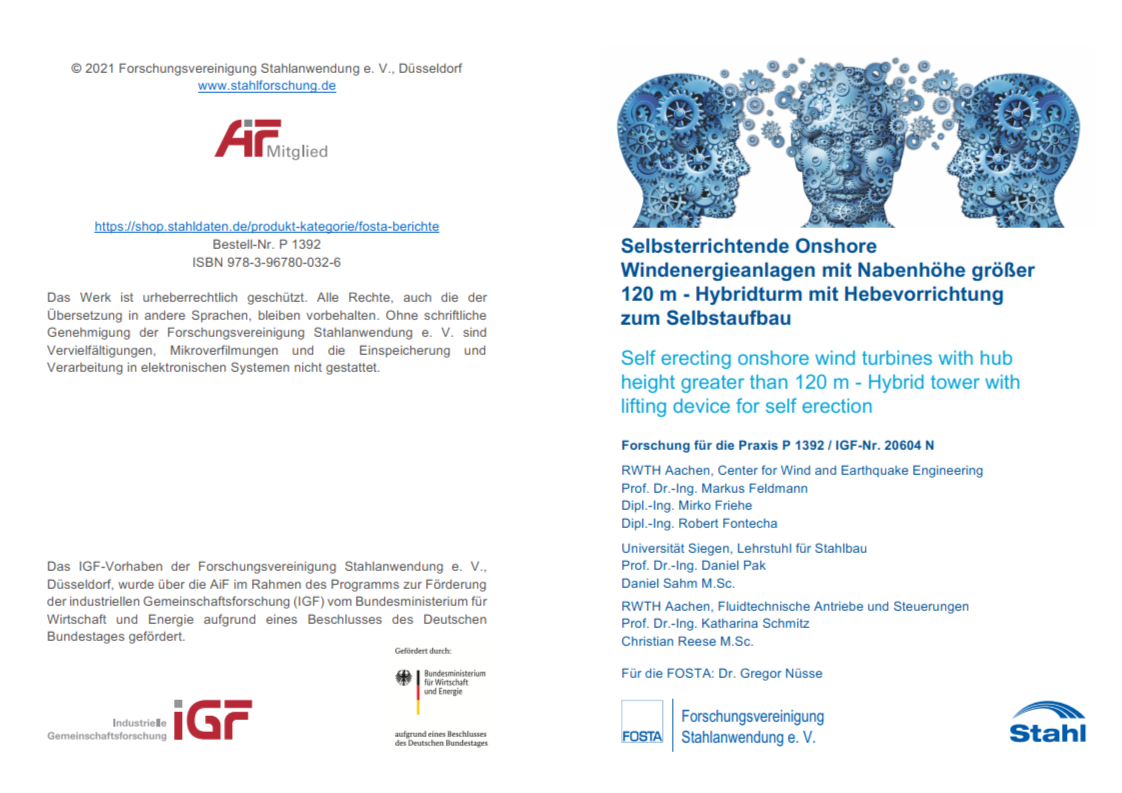 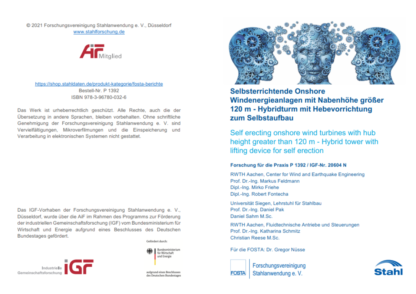 Economic crane concepts for the erection of wind turbines reach their limits from hub heights of 140 m, as from this height special crawler cranes must be used, the rental costs of which are significant. Their indirect costs should not be neglected either: for example, bridges and roads must be reinforced to allow the passage of the crane transport trucks, and the site itself may have to be prepared at great expense to create a flat surface large enough for the large crane structure. For this reason, intelligent solutions that avoid the need for large special cranes have been sought for some time.
In this research project, a self-erecting wind turbine with a steel hybrid tower was developed that does not require the use of special crawler cranes. The tower of the sample system consists of an 80 m high lattice tower with a special transition piece, through which the 100 m high tubular steel tower  including nacelle and rotor is lifted into its final position with the help of a strand lifting system.
First, reasonable size ranges to be investigated for the lattice tower and the tubular steel tower are defined, which result on the one hand from the requirements of the lifting process, and on the other hand from the turbines currently and in the medium term to be used for low-wind sites. In particular, the required hub height and rotor diameter are to be mentioned here, which are considered in the layout. The requirements from the point of view of the turbine manufacturers as well as from the point of view of the strand lift specialists are presented in detail and the resulting solutions are harmonised. In a next step, a sample system is introduced, on the basis of which all further design and dimensioning steps are presented exemplarily. This is followed by the definition of the loads for the final state and for the erection process, whereby the maximum wind loads to be applied during erection require special consideration. Again, the experiences of the lifting company and the plant operators are taken into account.
To stabilise the tubular steel tower during lifting, a purpose-designed stabilisation system is used, which takes up the tower bending moment via revolving, guided cylinders, which are arranged on two levels in the transition piece and hold the tubular tower in the vertical position. The hydraulic concept for the cylinders is developed and validated by simulations, taking into account the stiffness of the tower shell. Design and dimensioning of the tubular steel tower are initially carried out in a “conventional” manner for the final state. On the other hand, a specially developed software is used for the optimisation of the lattice tower, which generates a weight-optimised lattice tower structure on the basis of probabilistic methods. This software is made available to the user. Furthermore, wind tunnel tests are carried out to determine the force coefficients required for design. For the tubular steel tower, it is shown that the transverse loads acting from the hydraulic cylinders can be taken up. For this purpose, parametric studies are carried out to cover all phases of the lift as well as the previously defined parameter range for the tubular steel tower.
Furthermore, the transition piece is designed and weight optimised. For this purpose, requirements from the erection process and the operation of the wind turbine are defined first, which are taken into account in the design. Based on the investigated sample system, it can be shown that the erection and operation of the self-erecting wind turbine is economically feasible. 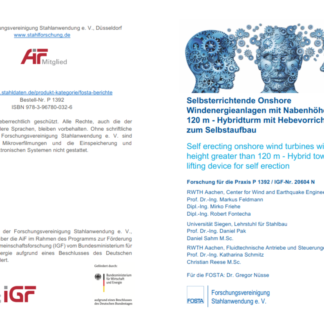 You're viewing: P 1392 – Self erecting onshore wind turbines with hub height greater than 120 m – Hybrid tower with lifting device for self erection 30,00€
Add to cart