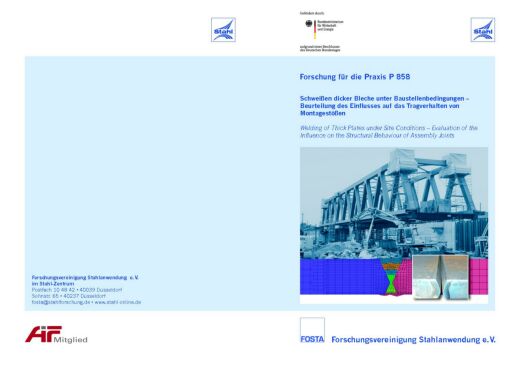 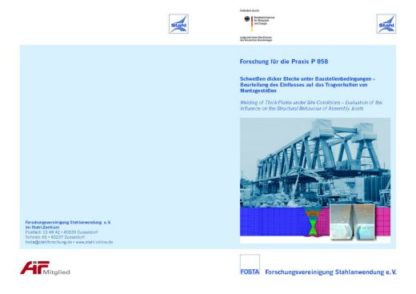 In case of larger structures in bridge and steel construction, modular factory manufacturing is currently the most common method. However, assembling of these modules on site is still necessary. The most common joining method is the MAG – multi-pass welding. Especially welding of thick plates requires a special effort not only from the executive company, the construction management and construction supervision but also directly from the designer. The most important information for the designer is the knowledge of occurring welding shrinkage, distortions and residual stresses. In particular for the realization of onsite welds these aspects have to be considered. In many cases an accurate knowledge of the phenomena caused by welding exists only from experience within the designing- and assembling companies. A fundamental and entire understanding of the processes during welding is missing. Therefore there is a lack of possibilities to transfer the knowledge from prior work to new constructions. Furthermore the behaviour of hightensile steel grades is essential. One example of these steel grades is the examined S460, which is more and more used in bridge and steel constructions.
Therefore, the aim of this research project is to work out criteria for the realization of thick plate welds under site conditions. As a result of the research project designers and inspectors will get a useful recommendation for typical on-site welds. By using the numerical welding simulation the occurring welding distortions and residual stresses can be calculated globally. An additional structural FEM analysis with integrated results from the welding simulation is the basis for further investigations.
Assembly on the site is often affected by pollution and weather and also may need to be carried out for example at low temperatures below freezing point. This situation was simulated in a climatic chamber and examined the effects of low ambient temperature on the structuralbehavior. In case of the investigated project no influence of varying ambient temperatures down to -10 °C was determined on resulting weld residual stresses. The comparison of distortion and residual stress compared with normative  values specified tolerance and simplified engineering models of the residual stresses show large deficits. Realistic   implementation of the residual stresses showed large reserves in the context of nonlinear load carrying calculations.
The research project (IGF-Nr. 16937 BG) was carried out at Institut für Füge- und Schweißtechnik, der Technischen  Universität Braunschweig und am Lehrstuhl für Stahl- und Holzbau, der BTU Cottbus-Senftenberg. FOSTA has accompanied the  research project work and has organized the project funding from the Federal Ministry of Economics and Technology  through the AiF as part of the programme for promoting industrial cooperation research (IGF) in accordance with a  resolution of the German parliament. 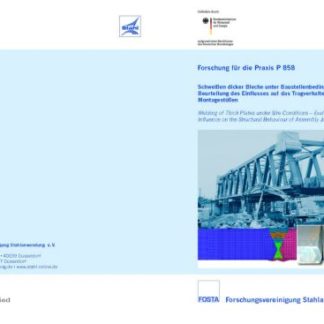 You're viewing: P 858 – Welding of Thick Plates under Site Conditions – Evaluation of the Influence on the Structural Behaviour of Assembly Joints 30,00€
Add to cart