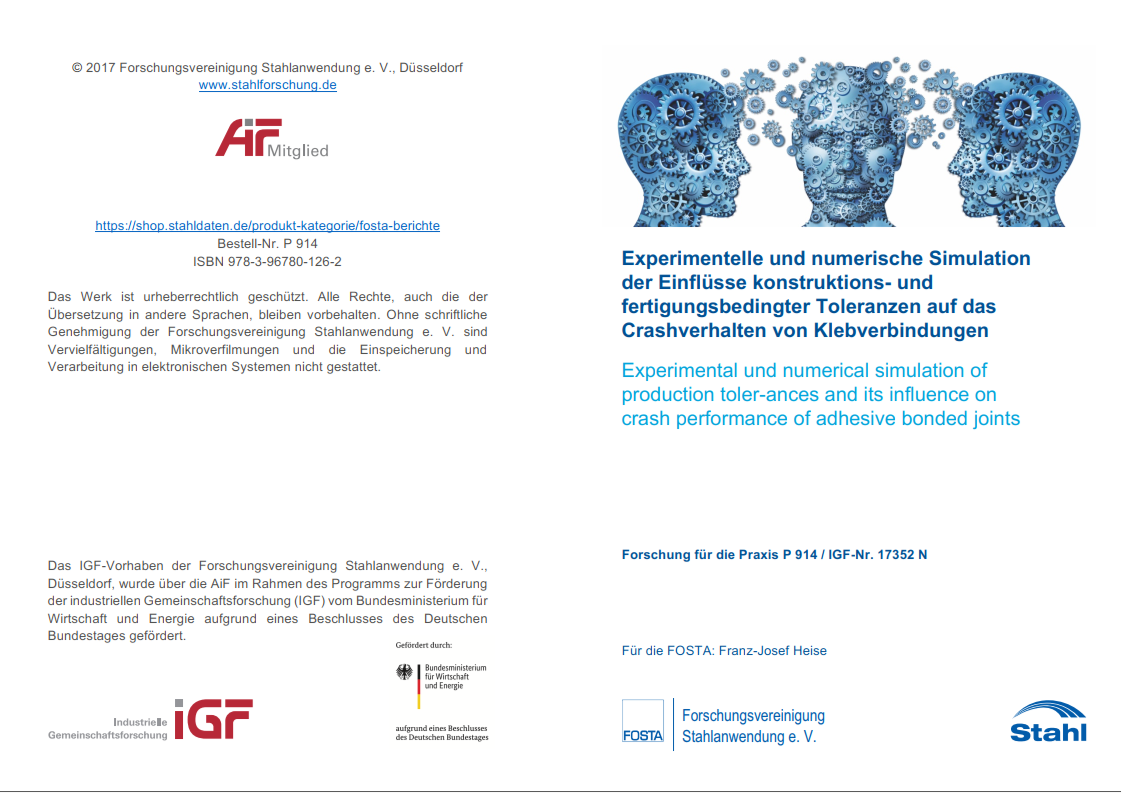 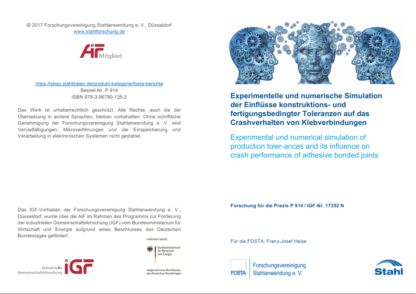 For the broad acceptance of innovative lightweight concepts, like the multi-material design, the adhesive bonding technology plays an important role. The optimal usage of this high-potential joining technology is faced with manufacturing and process influences which emerge in automotive mass production as geometrical discrepancies such as adhesive layer thickness and gap-filling. The deviation of the geometry may have a significant influence on the mechanical behaviour of the joint. The knowledge about this influence, also considering different load cases, is needed for the predictable application of this joining-technology. Therefore, the aim of this project is to show these influences on the load carrying capacity of adhesive joints to make them computable and predictable. Hence, appropriate geometrical manufacturing tolerances for the adhesive bond may be specified which contribute to a safer and more suitable design of the joint. Since the in mass production manufactured products show deviations from the idealized values of the simulation model, so that the measured mechanical behavior can differ significantly from the virtual model, these factors must be considered. In particular, the question occurs, how big these differences can be, without changing the overall behavior of the body in the event of a crash markedly unfavorable. To answer this question, a simulation method for estimating the crash behavior of bonded joints under consideration of the effect of design and manufacturing tolerances is developed. In order to investigate the mechanical behaviour of the adhesive layer and its dependence on adhesive layer thickness so-called in-situ-specimens are used. The two specimen types “thick adherent single lap shear specimen (TASS)” and “butt joint specimen (BJS)” are tested under the variation of the adhesive layer thicknesses.
Using these results, the parameters required for the material model are determined in dependence of the adhesive layer thickness. The verification and validation of the material model is based on technological experiments (single lap shear joint, peel specimen) and component-like samples (T-joint). With these specimens, especially the influence of the joining part materials was examined. In the case of metallic adherent materials was found a clear effect on the structural behavior of the joints. This arised in particular due to the deformation of adherent material and the resulting stress peaks in the adhesive layer. If glass fiber reinforced plastic (GRP) are used as assembly material, it often came to an altering failure mode which can be described as partial delamination of the top layer in the GRP.
As a consequence, this complex failure mode, which also led to less reproducible experimental results, cannot reliably predicted with the used simulation methodology. In case of material combinations with steel adherent materials a very high prediction accuracy was achieved 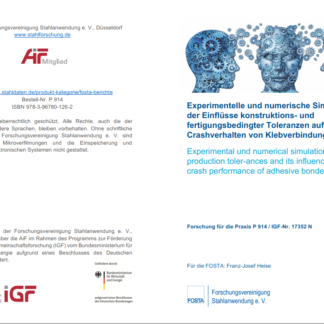 You're viewing: P 914 – Experimental und numerical simulation of production toler-ances and its influence on crash performance of adhesive bonded joints 30,00€
Add to cart